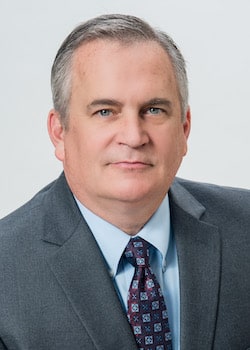 Born in 1965 in Huntington, West Virginia, Brian grew up in Spruce Pine, North Carolina. Brian's mother was a nurse and his father was a doctor in Spruce Pine who ran a clinic, worked in the hospital emergency room, made house calls to people in need. Brian often accompanied his parents when the house calls were after hours. Growing up in a home where taking care of others was so important continues to inspire Brian in his work representing injured and disabled people.

In the mid-1990's, before he began representing injured people, Brian worked for an insurance defense firm in Greensboro where he amassed considerable experience in injury litigation and wrongful death. His civil litigation experience, in both state and federal courts, includes auto and trucking accidents, negligence, premises liability, product liability, eminent domain, railroad employee injuries, construction, and business disputes. He has also presented cases before the North Carolina Supreme Court and the North Carolina Court of Appeals. Brian also devotes a considerable part of his practice to representing disabled people in hearings with the Social Security Administration.

Brian's past legal and volunteer work includes being an attorney advocate for the Mitchell County Guardian Ad Litem program from 1998-2015. Since 1995 he has been a volunteer attorney for Mitchell County Animal Rescue, and he has volunteered for Habitat for Humanity in Mitchell and Yancey Counties. He has served on numerous boards including the YMCA, United Way, Spruce Pine Montessori School, and the Spruce Pine Community Hospital Ethics Committee. He has been the Town Attorney for Bakersville, North Carolina since 1995.

Brian has a son, Jay and a daughter, Annie Jo. He and his wife Carla live in Burnsville and attend Higgins United Methodist Church.

Admitted to practice before the Social Security Administration

Accredited to practice before the U.S. Department of Veterans Affairs