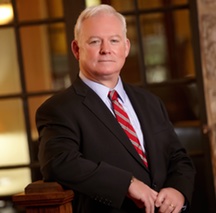 Michael Weilmuenster received his undergraduate degree from Vanderbilt University in Nashville, Tennessee and earned his law degree form the St. Louis University School of Law in 1987. He is licensed to practice law in the States of Illinois and Missouri.

Since graduation from law school in 1987, Michael has limited his practice to personal injury litigation concentrating primarily in areas of medical malpractice, product liability, construction injuries, and childhood sexual abuse. He has obtained numerous verdicts or settlements in excess of $1,000,000 for severely injured clients in complex personal injury lawsuits. In addition, in the past few years he has successfully prosecuted several multi-million dollar class action claims. Due to his success and reputation among his peers, he is recognized as an "Illinois Leading Attorney" in personal injury litigation. In addition, for over ten years he has been recognized as an Illinois "Super Lawyer" and a "Top 100 Trial Lawyer" by the National Trial Lawyers Association.

100% of Practice Devoted to Litigation