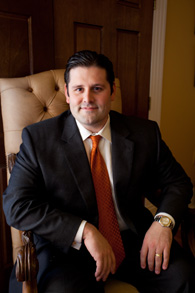 Jarom is an East Texas native who is a 6th generation resident of Upshur County, Texas. After becoming an Eagle Scout and graduating from Gilmer High School Mr. Tefteller enrolled in The University of Texas at Austin where he earned his Business degree from the Red McCombs School of Business which is ranked year in and year out as one of the top 5 undergraduate business schools in the nation. Upon completing his undergraduate studies in Austin, Jarom decided to follow in his father’s footsteps and attend law school at South Texas College of Law, a private law school located in downtown Houston, Texas.

His primary motivation for choosing South Texas college of Law was its top ranked Advocacy program which annually ranks above schools such as Harvard, Yale and Stanford. According to him, “I knew when I decided to become an attorney that I wanted to be a trial lawyer. I did not want to be another one those lawyers who talks a big game, but is really nothing more than a paper tiger. My goal is to take the fight to my opponents and the only way to do that is in the courtroom.” With over 100 national championships in Mock Trial and Moot Court competitions, Jarom knew he had come to the right place. While at South Texas, Jarom was hand selected out of a class of over 300 law students by Dean T. Gerald Treece to represent the Law School around the country in national Mock Trial and Moot Court competitions.

Upon finishing law school, Jarom came back to North East Texas where he was made the head of the Tort Section of the Tefteller Law firm. This section of the firm handles wrongful death and personal injury cases of all types. Jarom’s practice routinely takes him all over Texas in pursuit of justice for the families of injured people or killed loved ones.

Currently, Mr. Tefteller is happily married to his outstanding and very understanding wife Regina who has a full time career raising their two children, son Crockett and daughter Bonnie Anne. Jarom’s greatest passion in life other than his family is Longhorn Football which he follows with particular devotion. His other interests primarily revolve around hunting and firearm collecting and he takes every opportunity he can to enjoy the great outdoors.