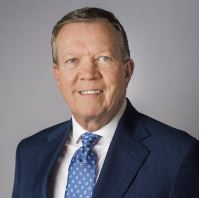 In 1973, Mike joined Texas Eastern Corporation as a computer programmer, working in Shreveport. “When I was working as a computer programmer fresh out of college, I realized that I liked to talk to people more than computers,” he said. “This was in the early 1970s when there was a lot of social unrest and I developed a desire to go to law school.”

He knew if he didn’t attend, he would regret it the rest of his life. He soon enrolled in South Texas College of Law in Houston. As it turned out, Mike loved the law and loved law school. He continued to work for Texas Eastern Corporation during the day while taking law school classes at night.

Upon graduation, Mike moved back to Arkansas with his wife to practice law and start a family. Mike worked as a Deputy Prosecuting Attorney in Little Rock and built relationships with local judges, court personnel, and lawyers. He then moved on to a private practice and learned about commercial law, including bankruptcy. During this time, he learned about commercial transactions and built relationships with many of the commercial entities in Central Arkansas.

Mike then joined Little Rock attorney John Gill at his new law firm, a spin-off from the Mitchell Law Firm. Gill hired Mike to represent Arkansas’ city officials through the Arkansas Municipal League Defense Fund Program, one of Gill’s long-term clients. Mike worked with city officials all over Arkansas and fell in love with constitutional law.

In 1985, he approached the Association of Arkansas Counties with the idea of forming its own liability defense program for Arkansas’ counties. That program started in 1987, and Mike and his law firm served as litigation counsel for the Association of Arkansas Counties. He represented county officials for 31 years was involved in over 6,000 cases. He is still Outside General Counsel to the AAC Risk Management Fund.

“I feel called to help individuals who are hurting from injury or other situations that have them on the sidelines of life,” Mike said. “I really enjoy building relationships. I love when the representation ends with a fully satisfied client and we have made a difference in someone’s life.”

What began as only a handful of lawyers has now grown to over 25 attorneys and over 100 support staff. The growth, according to Mike, is because of the care and compassion shown to each client.

“Everything we do is all about putting clients first,” Mike said. “That is the foundation of the firm. We know if we put our clients first, then everything else will take care of itself.”

Mike calls all of Arkansas “home.” He has represented cities, counties, and over 30,000 of Arkansas’ citizens – all over the state. He wants to be there for injured people and their families and strives to care for his fellow Arkansans.

“At Rainwater, Holt & Sexton, we are all in this together,” Mike said. “We are grateful to be able to come alongside and support our neighbors when they are facing a dark or difficult situation.”

Mike and his wife enjoy spending time with three sons and daughters in law and their six grandchildren. When he needs to get away, you can often find him hard at work on the family farm in Clark County, fishing on the Little Red River in Cleburne County or duck hunting in Arkansas County.

Who’s Who Among Students in American Universities and Colleges

Licensed to practice law in Arkansas, Tennessee, and Mississippi

The Best Lawyers in America©, recognized since 2006