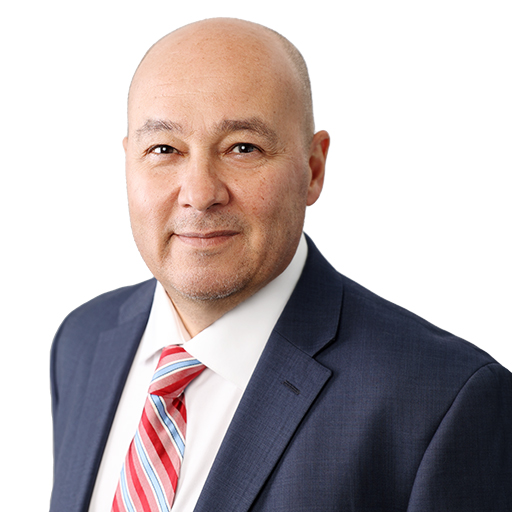 Richard Rizk, senior lawyer at Rizk Law, was born in Manhattan to young medical professionals. His father, a doctor who immigrated from Egypt, and his mother, a nurse from small-town Indiana, lived in a small Bronx apartment on a shoestring budget when they welcomed their baby boy. Unfortunately, it wouldn’t be long after Richard’s birth that his family would be forced out of the country due to a lapse in his father’s visa.

Unable to return to his father’s home country because the dictator had seized his family’s assets, they journeyed to the South American jungle. For the next few years, Richard’s parents operated a sparsely equipped medical clinic in Kwakwani, Guyana, until they could return to the United States years later.

“…we left the urban jungle for the real jungle of Guyana where I learned to walk, swim and talk. I was stalked by a boa constrictor and swam with piranha in the local river. Whenever I face hard times, I think of obstacles my parents faced in those early days of my life.” – Richard Rizk

Eventually the Rizk family would settle in northern Illinois. His father developed a successful medical practice which allowed the family to travel the world. Together, the family would explore Europe, the Caribbean, and the Middle East. However, tension began to build between Richard’s parents. During a trip to England in the 1970s parental tension peaked leading to his parents’ divorce.

Meanwhile, in grade school, Richard faced relentless harassment from other children for stuttering. On one occasion, his third-grade teacher even singled him out as disabled because of his speech impediment. From that time on, Richard took speech therapy sessions after school while the other kids played outside. By the time he reached his teens, the stutter had disappeared.

“Overcoming stuttering and opportunistic bullies was one of my earliest and most enduring accomplishments. Those early challenges brought me deep empathy for underdogs and tenacity to finish off bad actors.” – Richard Rizk

Richard’s childhood stuttering experience helped him appreciate what it feels like to be ridiculed because of a deficit, inspiring him to defend the underdogs. While in college he began coaching Special Olympics.

“I wish I knew a trustworthy law firm to call when I was bullied as a child. I know how terrifying childhood can be without true allies.” – Richard Rizk

At age 17, while attending Culver Military Academy in Indiana, Richard developed mononucleosis. His father drove 85 miles to retrieve him from the school infirmary, but it was late at night by the time he arrived. Between the surgery he had performed earlier that day, the falling snow, and the long drive, Dr. Rizk dozed off behind the wheel during the long drive home. The vehicle was traveling at a high rate of speed when it missed a turn and flipped several times before settling in a cornfield. Shivering, bleeding, and sick, young Richard faded in and out of consciousness until he eventually awoke in a hospital bed many miles away. This terrible experience would later serve as a source of motivation to found Rizk Law so he could help others in similar situations.

In 1985, Richard relocated to Portland, Oregon, to attend Lewis & Clark Law School, where he learned from Oregon’s most talented and respected law professors. It was during this time that he fell in love with the City of Roses.

While still attending law school, Richard landed a position with the largest workers’ compensation insurance company in Oregon. It was there that he would learn about the insurance game from various talented lawyers.

Later, he would accept an associate lawyer position with a Nationwide Insurance affiliate defending Oregon businesses in workers’ compensation and personal injury matters. Traveling all over the state, Richard learned about a wide range of industries, from large timber operations to small mom-and-pop machine shops. In 1996, Richard was promoted to Nationwide Insurance’s home office for environmental claims near Chicago. It was here that he resolved some of the highest exposure claims the company had at that time.

In the fall of 2000, Richard would return home to Portland, Oregon, where he would take a job at a well-respected, uptight law firm that lacked vision. Eventually, the firm would crumble, inspiring Richard to open his own law firm in Washington County. Rizk Law ran as a one-man show until the economic recession of 2008 when he moved the office to Multnomah County and eventually to its current location on South Iowa Street.

In 2013, Mr. Rizk served as Portland’s delegate to the Oregon State Bar, where he would advocate and vote on matters that impacted his constituents. One issue brought to the table was whether the Bar should support same-sex marriage.

During the debate, one lawyer who had strong feelings on the issue stood and exclaimed, “If we allow same-sex marriages, what is next, men marrying mules?”

“There were audible gasps while I quietly moved toward the microphone to speak. I turned to the man who feared mules and said, ‘Men may not be able to marry mules, but you, sir, are an ass.’ The crowd went berserk, and the other lawyer rushed me.” – Richard Rizk

The resolution to support gay marriage passed with what you could call flying colors. Today, Richard Rizk takes great pride in his work to build a better Portland, which he considers his true home.